In earlier posts in this series, we covered the geocoding of French locations and discussed the shape of the resulting dataset. To recap briefly:

In this post, we will explore some approaches to visualisation of this data using the statistical computing software package R. These examples will use a set of French location entity instances, based in the Bordeaux region.

Plotting coordinates on a map

Let's start by plotting the coordinate set directly onto a map. We will simply fill each occupied point with a red dot.We will also draw in the political boundaries of France and neighbouring countries as they exist today, using the rworldmap library. It is true that historical boundaries may be more informative, but in general, visualisation packages are intimately tied to the geography of the present day. For the time being, at least the use of present-day shapefiles (that is, geographical data files describing the vector graphic that forms the boundary of a given geometric shape (country, county, lake, river) provides us with an entry point into the visualisation.

We run the following code:

There; we've plotted the data points onto a graph. The output looks like this: 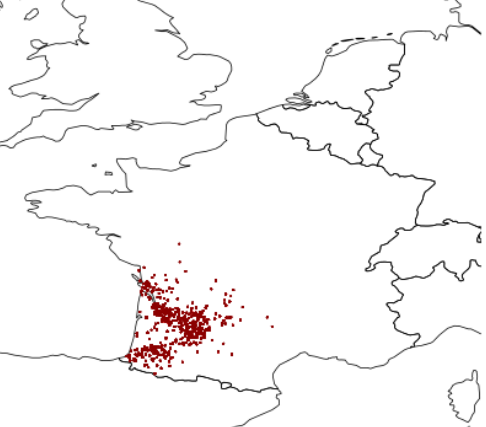 Periphally, it looks reasonably appropriate. There are a few minor issues; for example, there is a point rather too near the sea by La Rochelle. There are two likely reasons for that:

There's a third problem, too, although it is not obvious solely from looking at this map. It is this:some of these points have thousands of pins stuck in them, but most have just one or two.

Computers are perfect marksmen. If a computer is asked to stick a point in a map at a precise point, it will do exactly that. As a consequence, where multiple coordinate sets refer to the same point, this visualisation does not show the frequency of references to that point. It draws the same image whether one record or a hundred thousand records refer to a given point.

How should we fix this? One solution offered by R is the jitter() function, otherwise known as jogging Robin Hood's elbow, causing him to miss on purpose. Yes, this adds a small variation to the coordinates plotted, resulting in a random spread (Gaussian or normal distribution) around the targeted point. This is unlikely to be beautiful (we have essentially smudged the ink on the map) but it will give us a better idea of the true density of points on the map. 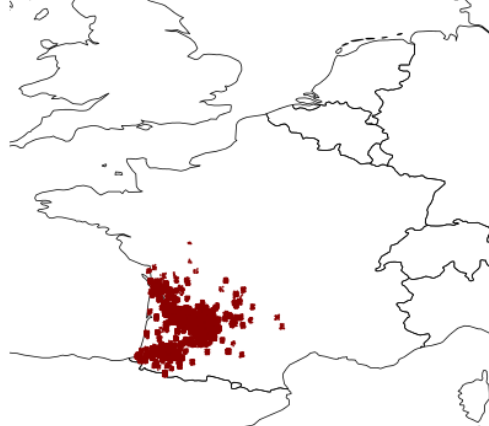 In one sense, this is a great improvement: it gives a better idea of the density of points identified. On the other hand, it is clear that the number of data points is overwhelming. Additionally, the sparseness of the underlying map tile is visually boring and uninformative.

If, instead of using dots, we tile in sections across the map (like a mosaic, using colour to symbolise the denseness of coverage of the area), we can use a semi-transparent overlay over a detailed map of France. For this, we use the ggmap library instead of rworldmap. 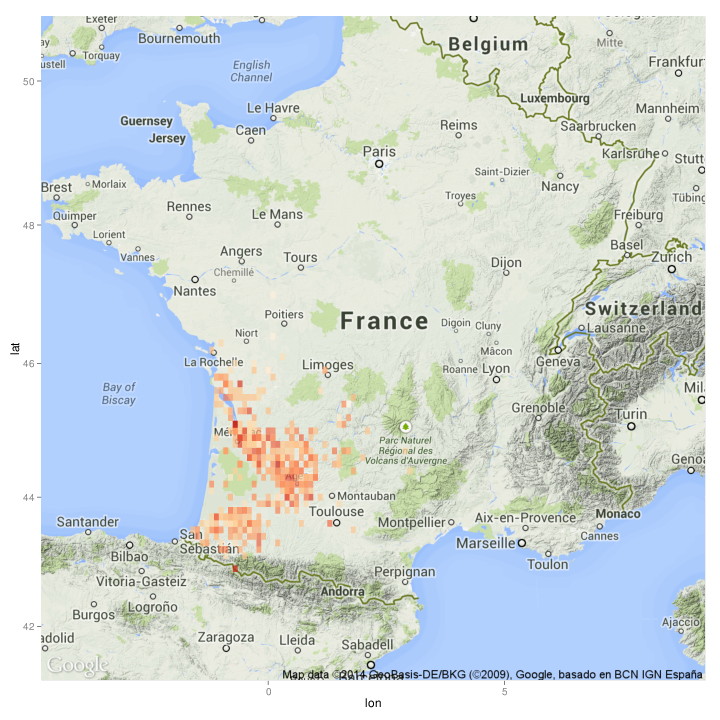 From this more detailed map, it is possible to see that one of the most densely referenced (reddest) areas is the centrepoint of Bordeaux.